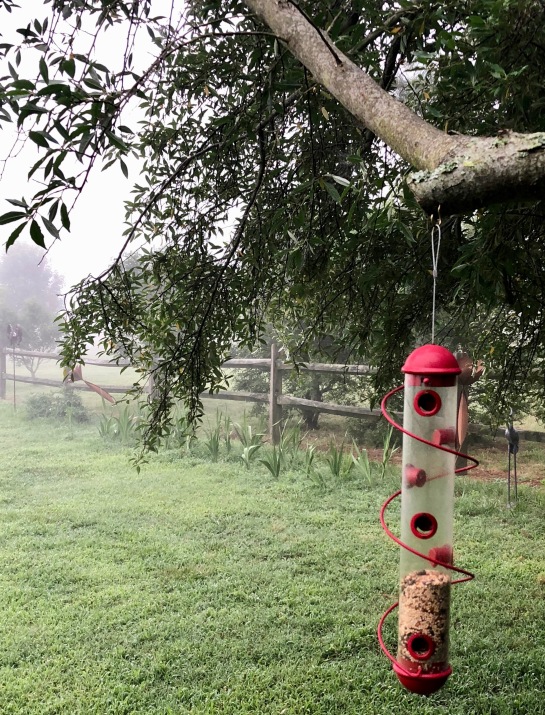 I hung the invitation beneath the tree in the backyard and waited. I was so excited. Who would stop by, I wondered? I don’t get many visitors way out here by the sea, so I was hopeful.

But nobody came.  Nobody.

Each morning for the first few days since I had hung the invitation beneath the tree on a little golden hook I had screwed into the low hanging branch, I had waited breathlessly. Somebody will come, I said to myself. And then when they do come, I will greet them, and we will be friends.

But nobody came.  Nobody.

Perhaps it was my fault, I thought. Maybe I had been a bit vague about who could come. I hadn’t meant to exclude anyone, but the feeder was built for the songbirds only. The little-spiraled wire that encircled the feeding tube was thin and delicate, so the invitation was for the smaller songbirds.

Each morning after my initial disappointments vanished, I checked the tube to make sure the birdseed was plentiful. It was. No one touched it. I also cleaned out the bird feeder that sat beside it keeping the water fresh.

Two days ago, when I rose with waning enthusiasm to check the feeder, I was so surprised. A little cardinal was on the wire pecking at one of the feeder holes. I stared through my binoculars so I wouldn’t disturb him. Finally, I thought, they’re coming. And they did. Soon the Brown-headed Nuthatch stopped for a snack along with a boisterous Northern Mockingbird.

Then something unusual happened. Some huge blackbirds sat nearby on a fence rail reading the invitation. They saw the fine wire and the tiny holes and sensed that they weren’t welcome. I stood back and wondered what they would do. I noticed they chatted furiously with one another, their conversation public and a bit edgy.

Then one flew over to the feeder and grasped the spiraled wire. It didn’t fit his oversized claws, but he was tenacious. He hovered, half-perched on the wire, wings fluttering to help him keep his balance. He tore at the feeder holes and poked out huge chunks of seed that fell to the ground.

At first, I was annoyed. These birds were too big, I thought. I hadn’t invited them. But then I slowly realized that they had determined that the invitation was for them.

I’m glad they come now. I’ve thought more about this whole thing, and I have decided that invitations should always be for everyone.