Introduction:
What were you doing on January 1991?  What was America doing on January 1991?  Let me jog your memory.  This was the year that we entered into a 60 billion dollar war.  That’s what it cost to conquer Saddam Hussein.  35 nations followed George Bush and the USA into battle to save Kuwait and conquer Iraq.  The war took 5 weeks.  There were 262 coalition casualties.  It was called Desert Storm.

Background:
Now let’s step into another desert storm, the one mentioned with such gravitas in the book of Luke.  Here we find the Savior still dripping with the baptismal waters of the Jordan being led by the Spirit into the wilderness of Judeato face trials and temptations of the Devil.  And as we step onto the hot sands of the desert, we realize a truth all too common to people of all ages.  We are all prone to trials, testing, and temptations in our lives.  We must be prepared and we must guard ourselves against the certain attacks of the enemy.

The wilderness of Judea into which Jesus walked is a place of majestic, silent beauty.  It begins near the city of Jerusalem and tumbles thousands of feet down to the Dead Sea. Moses stared humbly at this wilderness from the mountains of Moabto the east of the Dead Sea.  God, however, would not allow him to enter. But Jesus did venture into the wilderness, led by the Spirit and you and I must also enter daily for the life of a Christian is not void of trials.  We, like the Savior, must expect the devil to attack us daily, seeking our weaknesses, exploiting our frailties, striving to weaken our resolve to follow Jesus to the end.

The Judean wilderness where Jesus walked for 40 days is the home of one of the world’s oldest monasteries—Mar Saba.  If you could look down from the air you would see it perched precariously on the edge of the Kidron Valley midway between Jerusalem and the Dead Sea.  Built in the year 483 it houses today about 20 monks and is considered to be one of the world’s oldest monasteries.  It still maintains many of its ancient traditions. 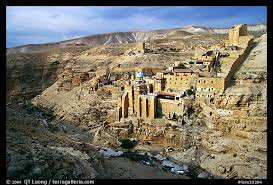 It was into this rugged wilderness, the desert of Mar Saba, that Jesus wandered without food or water for 40 days fending off attacks by the Devil.  He studied the Savior and searched for weaknesses.

And so we too must learn to say NO! to the daily temptations that come our way.  And we can do this God’s help.

*When was your last big test?  How did you handle it?  Did you fall apart?  Did you find your way through to success?

*The biggest test of my life did not come at my doctoral defense even though my best friend Phil Walker had gone into the room where the professors waited to grill all candidates for the doctor’s degree. And when he came out he was in tears. They had flunked his dissertation.  After many years of seminary work, he left without a degree. And as he passed me in shaking his head in utter disbelief, the door swung open and a boney hand from the lead professor summoned me in next.

No, the biggest trial of my life came at a much earlier time in my life.  I was just entering the second grade.  I had left Ms. White, my first-grade teacher behind in Sumpter South Carolina where I used to live in peace and tranquility.  And now I was in Japan and this was my first day in second grade with anew teacher I did not know or trust.  Her name was Ms. Mud and I think it was an appropriate name.

I sat near the back. I did not know anybody. I had no friends.  And then Ms. Mud made a declaration.  “All right, Class get out a sheet of paper.  We’re going to have a test.  I looked at her with my eyes blinking.  Ms. White didn’t give tests.  What is a test?  I squirmed uneasily.  “Number you page from 1-20.  I sighed with relief.  I did know my numbers.  I could probably count to 30.  I had this.

But then she started with something I did not understand.  She called out a word.  She said “our first word today is tree.  I noticed all the kids writing but I didn’t know what to write.  What did she want to know about trees?  I did like trees.  I had fallen out of one once.  I panicked. I didn’t know what to do.  So I just wrote YES!because I knew I did like trees.  But she kept going.  Our next word is DOG.  Everybody began writing.  I did like dogs.  I had a dog named Fluffy.  “YES! Our next word is GIRL.  By now I had it down.  Of course, I had no use for girls.  That was easy.  I wrote boldly the word NO.

When I was all down with the 20 words I turned in my test paper and waited for the verdict. Finally, she curled her finger at me like my doctoral professors and summoned me forward.  I came with high hopes. She stared at me hard with dark eyes and then scribbled a huge E on the paper.  I looked at the verdict and then smiled with such pride.  An Excellent on my fist test.  (It wasn’t until I got home that realized that than an E was a flunking grade).

Conclusion:
Tests and temptations come in all shapes and sizes.  None of us are immune to life’s trials.  Even Jesus faced them as we see so clearly in His Judean Wilderness experience.

Let’s close with the wondrous words of Ps 91, a Psalm for those under attack from the devil, for those of us in the midst of a desert storm.

In this amazing Psalm, we learn that God is our refuge and fortress in times of testing and temptation.  He builds an impenetrable wall about us.  He protects us.  He shelters us with His wings.   And he sends his angels to guard us in times of duress of temptation.

Each of these thoughts is a sermon in itself. God is our fortress—He shelters us with His wings—He sends His angels to watch over us.  Such powerful truths to help you and me through our wilderness wanderings, when we are under attack.